As I started going though the ideas I had for automation and connectivity in the house one thing became very obvious: Everything required some sort of connectivity. It could be coax for cable/satellite TV, or Cat5 for phones, or Cat6 for network and AV distribution. The common denominator was that there needed to be some kind of connectivity.

I’ve dabbled on the IT Pro side of the fence in the past so I know that cobbling together a wiring solution was likely to end up in a world of pain. Rather than do that I decided that one of the first things that needed to be done to the house was to add some wiring in. As with many “stock” houses these days, the only wiring done was coax to 3 locations for TV and some Cat5e run for phones. Everything terminated at the power panel with hardly any extra cable to use. The way that our house is setup, the power panel is in an awkward location that didn’t lend well to much of anything. There was no way I was building an accessible wiring closet in that location without completely blocking the power panel so I had to come up with another option (plus, the area near the power panel, awkward as it is, was quickly designated the future wine cellar…priorities right?).

The location that I ended up settling on was about 15ft away from where all the builder installed wiring was terminating. So I had a couple problems on my hands. First, I needed to get more wiring run, and second I needed to extend the current cabling to this new location.

As I said earlier I had Coax and Cat5e that needed to be extended. The Coax isn’t so hard. there are plenty of male-to-male connectors available. All you need to do is buy/build some cables to get from the current endpoint to the desired endpoint. Because I hate sloppy cabling I decided to custom make my cables so that they fit precisely to length. A few tools, 30 minutes in Home Depot watching a YouTube video on how to crimp ends on and I was good to go. Because I didn’t want the cables running willy-nilly under our stairs I spent some time with a speed bore and punch holes in the studs so that I could run the Coax through the walls and have it pop out right where I needed it. 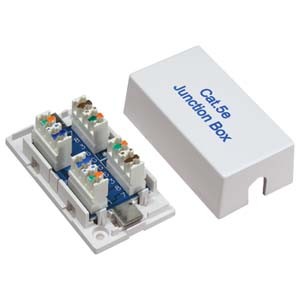 The Cat5e extension was a bit more of an issue. There really aren’t that many ways to extend network cable. I did manage to find a set of 110 punchdown boxes though. Wire goes in one side and punches down; wire comes out the other side where it was punched down. A small PCB board in the box makes all the connections for you. So, like the Coax, I custom cut some Cat5e, ran it through the studs and ended it where my new termination location was going to be.

Most new houses are built with no data wiring in them. It seems that the common belief is that WiFi is ubiquitous and convenient enough that there’s no value in doing so. I disagree. WiFi is convenient. It is easy to procure and setup. It doesn’t, however, offer a very good data transfer rate for most devices. Yes 802.11N offers decent speeds but its nothing compared to gigabit and if the WiFi signal is weak in an area of the house, the data connection will be slower than advertised. On top of that, not all the devices in our house are WiFi enabled so they either have to sit near the router or be off the network. Neither of those options will work for us here. And don’t get me wrong, there will be WiFi in the house.

So to fill my need for gigabit speed I got some electricians to stop by and run a bunch of Cat6 cables for me. Each run ends in the basement termination location. Here’s what I ended up getting:

Unlike the home builder, I had the electricians leave 20+ feet of extra cable on the termination end just in case I changed my mind about the termination location. Most of that extra cable, once trimmed, has gone to building patch cables so it wasn’t a waste at all.

If you have the chance do get data cabling done before the walls in a house are closed up…or get lots of empty conduit run. We were lucky that all that cabling only required one hole in an inner closet wall. Not much damage but the time spent getting the cables pulled sure added to the cost. 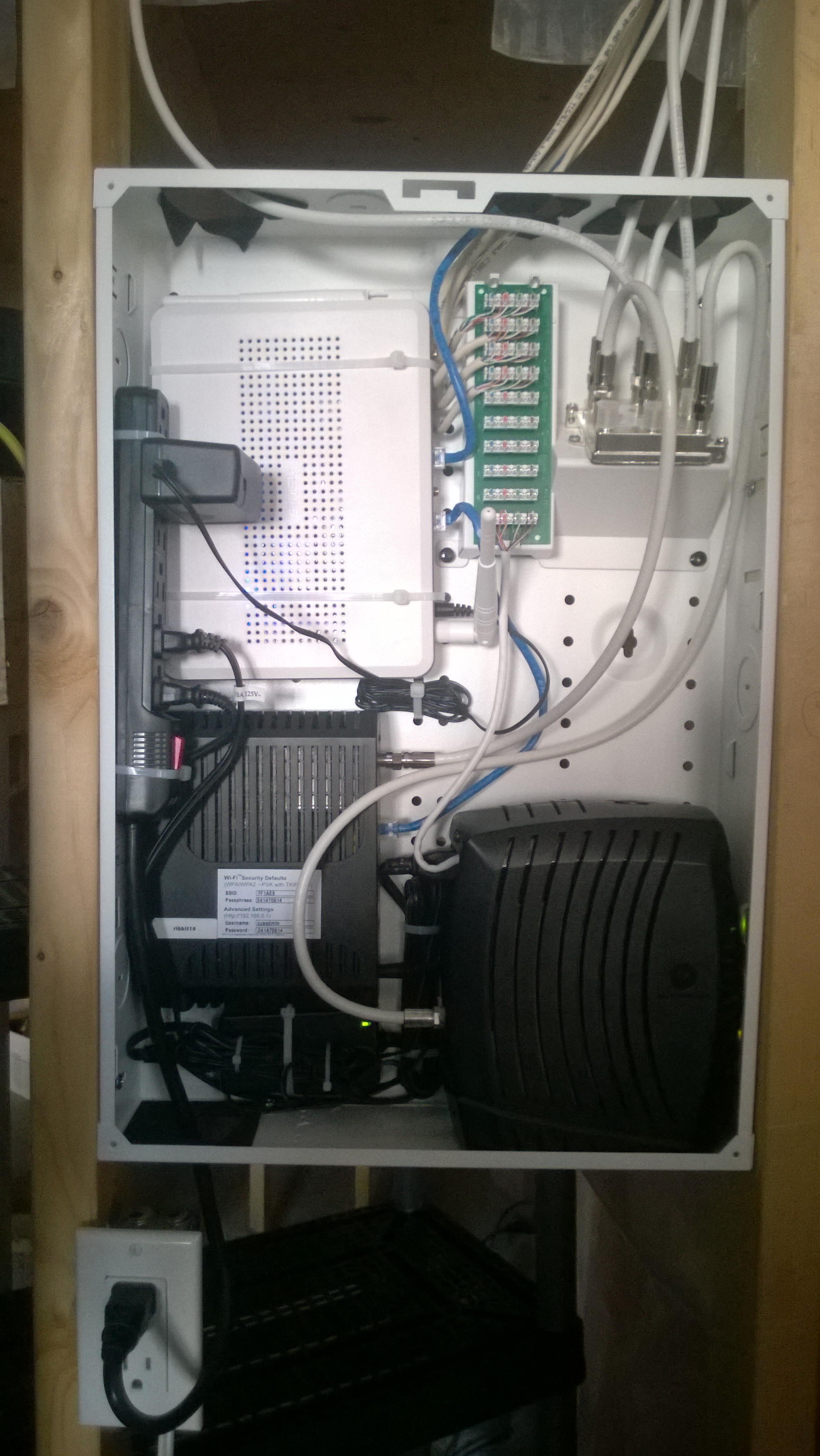 Once I had cables run to a centralized location I needed to figure out what I was going to do to manage the termination of these feeds. After some googling around I found out about media enclosures. These are just a metal box that gets installed between two wall studs and gives you a solid platform to mount different devices to. I had a bunch of small devices that I wanted to house so this seemed like a good idea. In the end it is home to my 8-way coax splitter, 8-way phone junction point, cable modem, cable-to-phone box and a WiFi router (more on that in a later post too).

Now, I needed to manage the termination of the 12 or so data lines and the 4 phone lines that I had coming to this central location. Unlike the coax lines flexibility in configuration was going to be a huge benefit here. To that end I ran all of those cables into a rack and terminated them in a patch panel. I also terminated the line from the WiFi router in the patch panel. This give me the ability to directly connect any data line wall jack in the house directly to the internet connection. I can also create a physically separate network if I need/want to. Right now all required data lines are patched from the patch panel to the switch giving full gigabit connectivity within the house.

I hate weak WiFi signals. To combat this I put a WiFi router (configured as an access point) on each floor and connected it via one of the gigabit data runs back to the main switch. With that I actually killed two birds with one stone: I was able to get stronger WiFi everywhere, and I got a 4 port switch in those locations. The 4 port switch actually turned out to be very useful. At one TV location all of the following devices can be connected:

In the end it all logically looks something like this 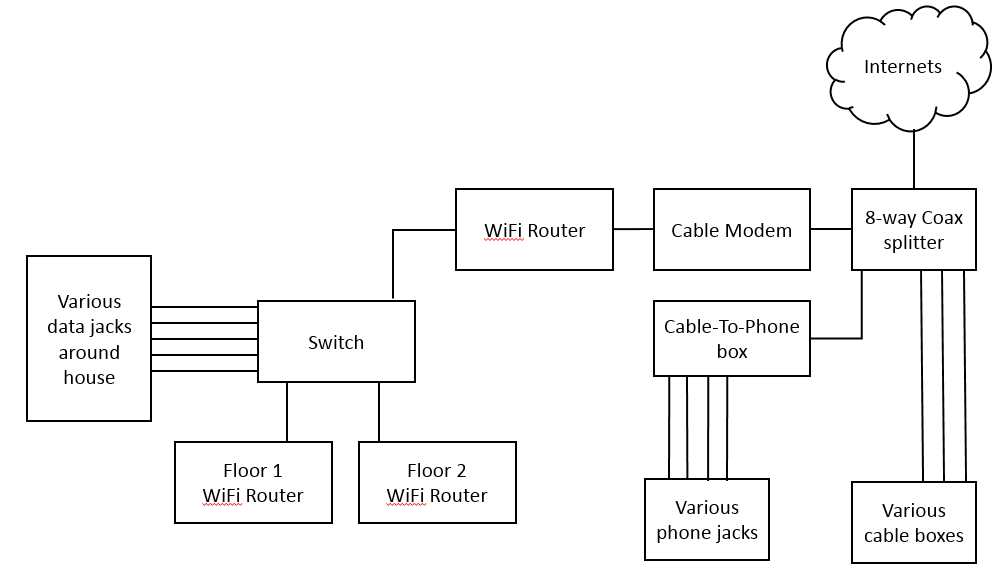 And, amazingly enough, it all works as desired and with all of this I now have a foundation to add home automation components onto.